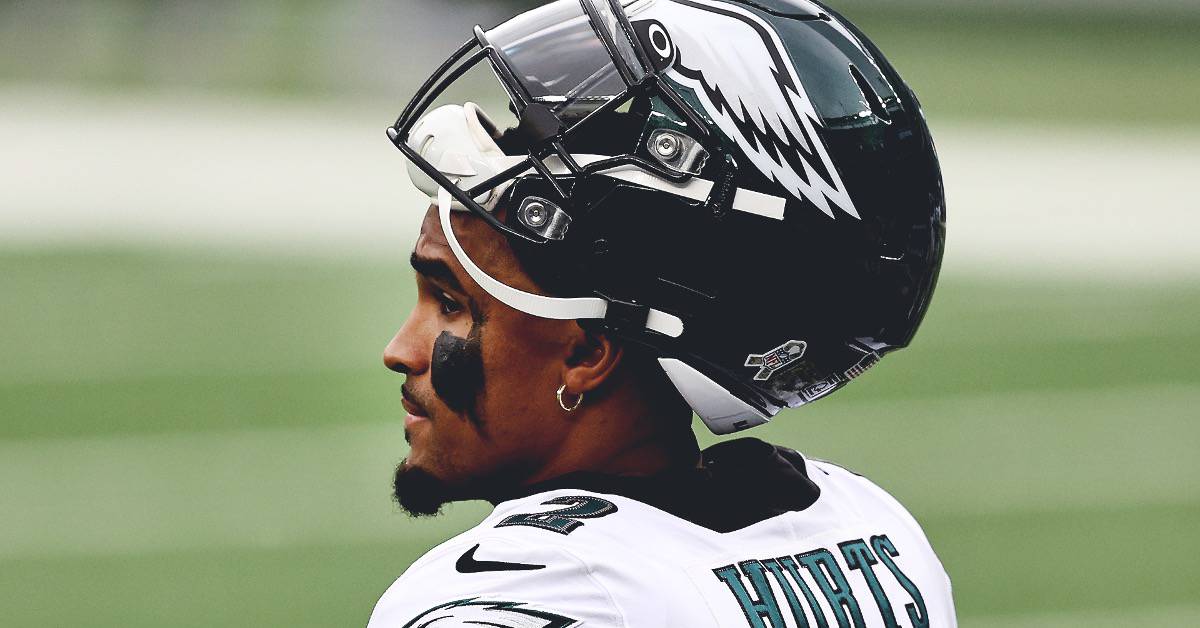 Jalen Hurts has led the Philadelphia Eagles to a top-tier performance and was the star of the show despite his side losing to the Arizona Cardinals 33-26.

The young quarterback, and 53rd pick on the NFL draft, recorded three passing touchdowns and ran for another in what was basically him against the Cardinals.

Hurts ended the game 24-for-44 for 338 yards and rushed 63 yards, and was on the verge of getting his team over the line. However, the Eagles’ didn’t manage to complete their comeback, failing to overturn the deficit despite Hurts producing a fantastic performance.

Wentz to Continue as Backup

The rookie’s top-drawer performance came on the same day when media reported that Carson Wentz was definitely not interested in staying in Philadelphia while also being the backup to Hurts.

The 27-year-old, who was pulling all the Eagles’ strings up until recently, has now been relegated to a sidelines figure, and his role will likely only be to mentor the rookie from now on.

Sources close to Wentz told ESPN that he wasn’t pleased with the way things were going and that he definitely wouldn’t settle for being the second-choice quarterback in the roster. The people close to Wentz said that if nothing changed soon, he would ask for a move.

Coach Doug Peterson said that he understood that it’s frustrating for a player of Carson Wentz’ caliber to watch games from the sidelines, but he was happy with how he had dealt with the situation so far.

Peterson said that Wentz had done everything they asked him to do and that he was helping Jalen, in addition to being a good pro.

The problem with Wentz is that the Eagles are financially committed to him as they gave him a four-year, $128 million extension in 2019.

Now, only a year or so later, they face the difficult decision of taking a dead-cap hit of around $60 million should they decide to cut him, or more than $30 million if they go for a trade.

Considering Hurts’ last couple of performances, it is unlikely that Wentz will get anywhere near the Eagles’ offense for the rest of the season. The chances are that the same will happen when the next season starts.

Hurts’ three passing touchdowns and run for another one made him the first Eagle to do that since Nick Foles back in 2013.

Jalen was instrumental in reducing the Eagles’ 16-0 deficit by tossing three scoring passes in the second quarter, and his team trailed behind by only six at halftime. And then, late in the third quarter, his 7-yard rushing touchdown evened the score.

However, the Eagles weren’t able to build on that and lost the game, even though they tried hard to turn things in their favor, including a couple of late Hail Mary attempts.

Jalen Hurts’ excellent performance might have been a surprise for those that didn’t know much about the surprise 53rd pick on the NFL draft. But those who have followed the rookie closely this season knew it was only a matter of time until he exploded on the big stage.

Hurts seems to share those sentiments himself, and it’s fair to say that he doesn’t lack confidence when it comes to knowing what he can do on the field and how far he can go in the game.

Here’s what he had to say about his status as a rookie and his and his team’s prospects:

Will Likely Start Against the Cowboys

Coach Pederson has been impressed with Hurts’ mental and physical toughness, as well as the leadership that he has shown playing against a strong Cardinals defense.

He said that the second-start rookie was doing a great job and that, although he still had room to grow, he almost single-handedly turned the game against the Cardinals around.

That’s why it’s not surprising that everyone now expects Hurts to start the next game the Eagles play against the Dallas Cowboys.

Coach Pederson said that he would be announcing the starter for that game on Monday, but based on that last performance, it will be Jalen Hurts leading the Eagles offense in his third consecutive start.