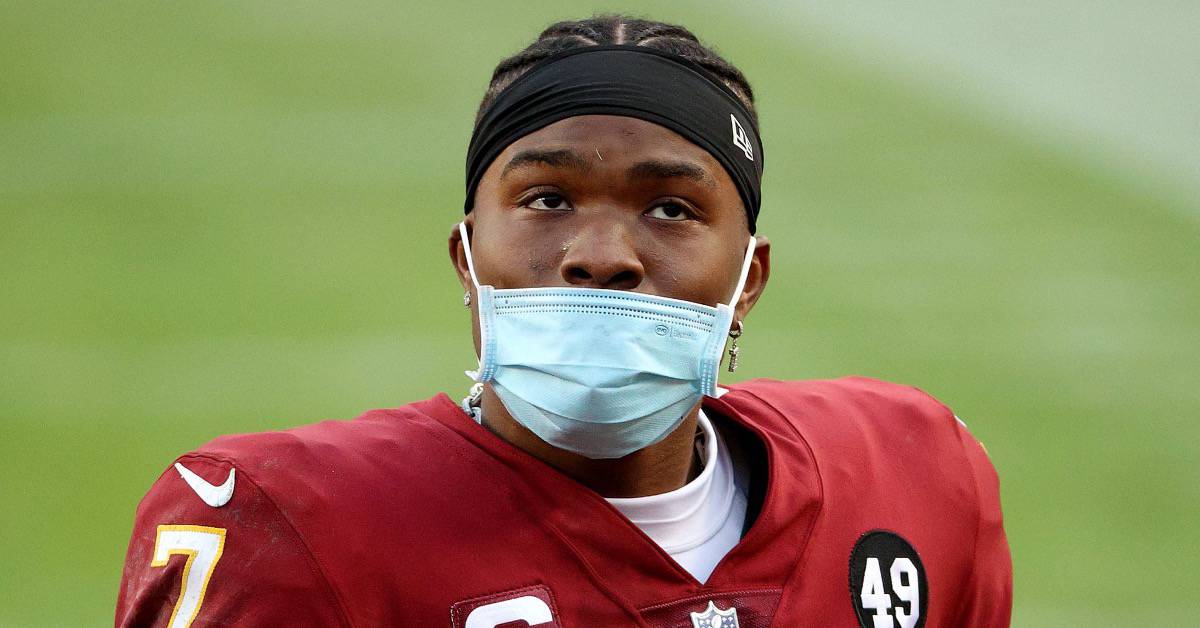 Dwayne Haskins, Washington Football Team’s, star quarterback has reportedly been fined $40,000 and has lost his captaincy after pictures of him attending a birthday party without a face mask were posted on Instagram.

The quarterback has always had doubters questioning his maturity and decision-making, and this maskless outing won’t help to improve his reputation.

A Birthday Party with Strippers

When the pictures were first posted on Instagram, it seemed like Haskins was in a strip club, but the player later clarified that it was actually a private birthday party with strippers.

However, that didn’t change the fact that the young quarterback was in an indoor nightclub with many other people. To make matters worse, Haskins wasn’t wearing a mask during the entire time he was there.

Putting Those Around Him in Danger

The first-round pick from two years ago broke NFL and NFLPA protocols put in place due to COVID-19, putting in danger the health of his teammates and everyone around him.

What makes Haskins’ reckless nightclub outing even more baffling is the fact that his coach, the legendary Ron Rivera, has just finished his last chemo treatment for squamous cell cancer.

Washington Football Team’s coach went through his last chemotherapy procedure in late October. As such, he is considered a high-risk individual when it comes to contracting COVID-19.

Haskins apologized for his actions immediately after the photos were posted and said that he takes “full accountability” for putting his team at risk.

However, that didn’t dissuade his team from taking the appropriate action to sanction his maskless outing during a worldwide pandemic.

Washington decided to strip Haskins of his captaincy and fined him for his reckless behavior. His teammates elected Haskins to be team captain during training camp, but coach Rivera has now informed him that he will lose his captaincy for an indefinite period.

According to Ian Rapoport of NFL Network, the team has also fined the player $40,000, or more than half of his weekly paycheck.

If Rapoport’s numbers are correct, then Haskins’ fine is the largest penalty that clubs have issued for their players for a COVID-19 breach of protocols.

In October, several Las Vegas Raiders players were reportedly penalized for attending a charity event without wearing face masks, but they were fined a maximum of $30,000 per player.

And while most players would feel ashamed if their clubs fined them even once in their careers, for Haskins, this is the second COVID-19 protocol violation and fine in less than three months.

He was fined $4,833 in October after he arranged a visit for a friend of his family to the hotel where he was staying, even though he was not allowed to do that.

This latest incident will most likely cost Haskins his start in Week 16. On Wednesday, Coach Rivera said that Alex Smith would start the game, but seeing how he missed last week’s game due to a calf injury, he might have to sit out the Panthers game as well.

If that happens, then Washington will be down to Haskins and practice squad quarterbacks Steven Montez and Taylor Heinicke. This means that Haskins might still get the nod to start that game, provided he doesn’t test positive on some of the daily COVID-19 tests taken leading up to the game.