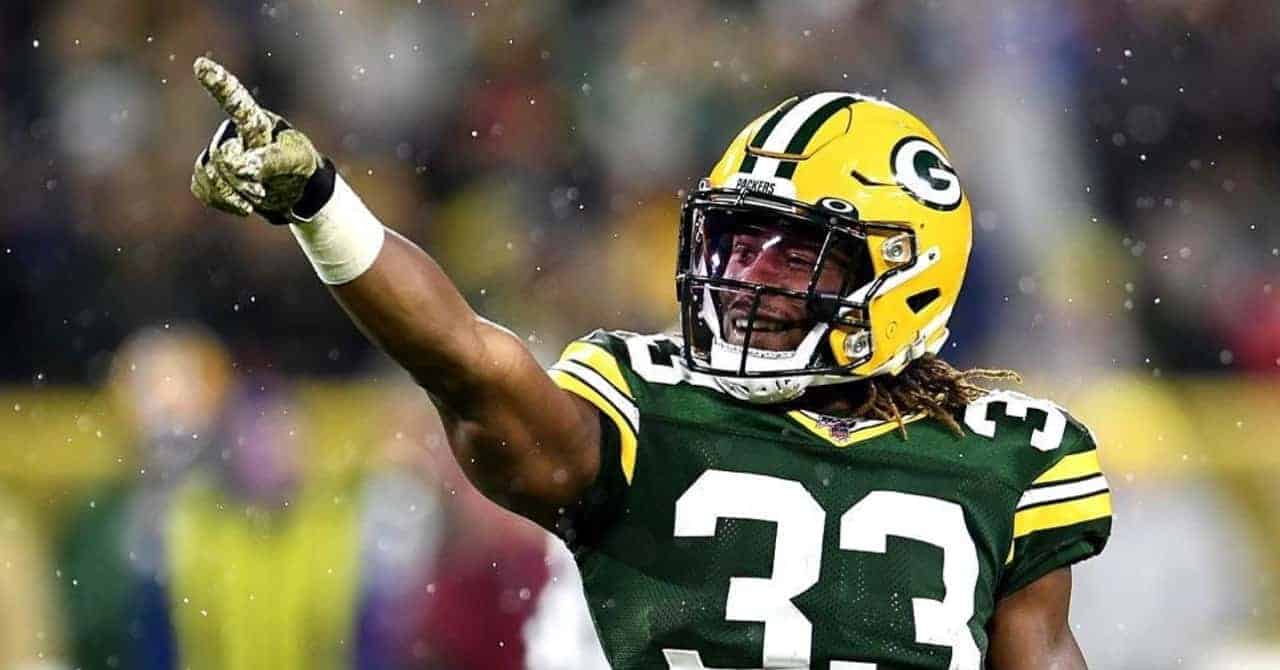 The Green Bay Packers got their first win of the NFL season when they beat the Detroit Lions on Monday, and it was Aaron Jones who ran the game. The Packers running back scored four touchdowns and caught three touchdown passes, something that no Green Bay player has done since 1942.

Unfortunately, during one of Jones’ four celebrations in the end zone, he also lost his father’s ashes. The Green Bay star wore a necklace that contained some of the ashes of his father, who died in April last year from COVID 19 complications.

Luckily for Jones, the necklace and his father’s ashes were found after the game, meaning nothing marred his great night.

The Detroit Lions duel was the first game Aaron Jones played in front of the Packers faithful after his father died. It was evident that he was very inspired to put in a memorable performance and he credited his late father for it.

Jones, who lost his father Alvin Jones Senior to COVID-19 in April 2020, said that his dad taught him that what made you a man was the way you responded to adversity.

Jones was really proud of how his team dealt with the fair share of problems they had recently and said he felt they did “a great job of responding.” He added that the whole team played well and at a high level.

The End Zone – Best Place to Lose the Necklace

One thing that could have put a dampener on the night was Jones losing the necklace containing some of his father’s ashes. After the game, Jones said that the grounds crew told him they were going to search the end zone to try and find the necklace.

However, even if the men searching didn’t find his necklace, Jones was content that at least he lost the ashes in a place where his father would have wanted to be – in the end zone.

Impressive Performance from Rodgers Too

Jones, who had 6 catches for 48 yards and 17 carries for 67 yards, was the first Packers player to catch three touchdowns in one game since 1942. Andy Uram was the last player who managed to do that, but he did that way back in 1942 when the Packers played against the Chicago Cardinals.

The Detroit Lions game also showed how badly the Packers need their star quarterback, Aaron Rodgers, to once again start firing at all cylinders.

Rodgers had four touchdown passes. Jones caught three of those. He also rushed for a fourth. That offense was once again as deadly as Packers fans want it to be.

In essence, the 35-17 win was a nice reminder for the Packers faithful as to how well their team can play when things click, especially after the disheartening 38-3 thumping they suffered at the hands of the New Orleans Saints in the first game of the NFL season.

And to cap a wonderful night for Aaron Jones, the Packers found the necklace containing his father’s ashes. Aaron wrote on Twitter that the necklace was retrieved at 1.45 am and thanked their trainer Bryan “Flea” Engel for staying that late to find something that mattered so much to him.